The project launched today (April 25, 2013) is expected to improve the production and market competitiveness of camel milk products in the Somali Region to improve incomes and nutrition for up to 50,000 targeted households in the Siti (Shinile) and Fafan (Jijiga) zones. 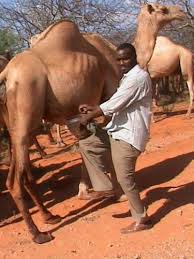 The project, implemented by Aged and Children Pastoralists Association, will…

I wrote a PhD about veterinary parasitology so that's the starting point for this blog. But I'm now branching out into other areas of biology and into popular science writing. I'll write here about science that happens in landscapes, particularly farmland, and about science involving interspecific interactions. Datasets and statistics get my attention. Exactly where this blog will lead? That's a journey that I'm on and I hope you'll come with me.
View all posts by argylesock →
This entry was posted in agriculture and tagged camel, development, livestock, milk, pastoral, ruminant, trade. Bookmark the permalink.